The Hindustan Times, the second largest daily in India, did an exclusive story on The Archive of Healing. 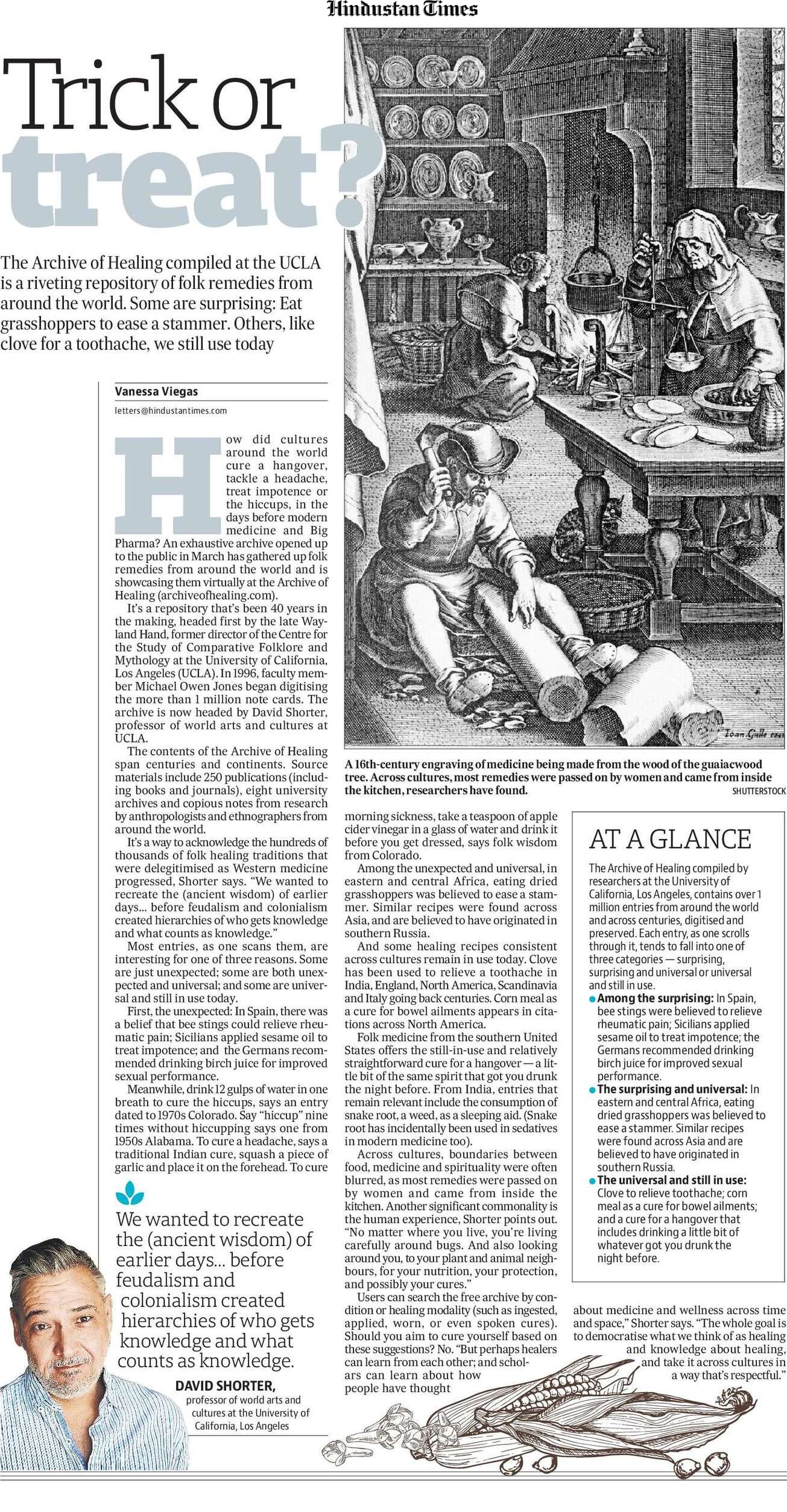 Trick or Treat?
by Vanessa Viegas
The Archive of Healing compiled at UCLA is a riveting repository of folk remedies from around the world. Some are surprising: eat grasshoppers to ease a stammer. Others, like clove for a toothache, we still use today.
How did cultures around the world cure a hangover, tackle a headache, treat impotence or the hiccups, in the days before modern medicine and big pharma? An exhaustive archive opened up to the public in March has gathered up folk remedies from around the world and is showcasing them virtually at the Archive of Healing (archiveofhealing.com).

It’s a repository that’s been 40 years in the making, headed first by the late Wayland Hand, former director of the Center for the Study of Comparative Folklore and Mythology at the University of California, Los Angeles (UCLA). In 1996, faculty member Michael Owen Jones began digitizing the more than 1 million note cards. The archive is now headed by David Shorter, professor of world arts and cultures at UCLA.
The contents of the Archive of Healing span centuries and continents. Source materials include 250 publications (including books and journals), eight university archives and copious notes from research by anthropologists and ethnographers from around the world.

It’s a way to acknowledge the hundreds of thousands of folk healing traditions that were delegitimize as western medicine progressed, Shorter says. “We wanted to recreate the (ancient wisdom) of earlier days… before feudalism and colonialism created hierarchies of who gets knowledge and what counts as knowledge.”
Most entries, as one scans them, are interesting for one of three reasons. Some are just unexpected; some are both unexpected and universal; and some are universal and still in use today.

First, the unexpected: In Spain, there was a belief that bee stings could relieve rheumatic pain; Sicilians applied sesame oil to treat impotence; the Germans recommended drinking birch juice for improved sexual performance.

Meanwhile, drink 12 gulps of water in one breath to cure the hiccups, says an entry dated to 1970s Colorado. Say “hiccup” nine times without hiccupping says one from 1950s Alabama. To cure a headache, says a traditional Indian cure, squash a piece of garlic and place it on the forehead. To cure morning sickness, take a teaspoon of apple cider vinegar in a glass of water and drink it before you get dressed, says a source from North America.

For both unexpected and universal reasons, in eastern and central Africa, eating dried grasshoppers was believed to ease a stammer. Similar recipes were found across Asia, and are believed to have originated in southern Russia.

And some healing recipes consistent across cultures remain in use today. Clove has been used to relieve a toothache in India, England, North America, Scandinavia and Italy going back centuries. Cornmeal as a cure for bowel ailments appears in citations across North America.

Folk medicine from the southern United States offers the still-in-use and relatively straightforward cure for a hangover — a little bit of the same spirit that got you drunk the night before. From India, entries that remain relevant include the consumption of snake root, a weed, as a sleeping aid. (Snake root has incidentally been used in sedatives in modern medicine too).

One significant commonality is the human experience, Shorter points out. “No matter where you live, you’re living carefully around bugs. And also looking around you, to your plant and animal neighbors, for your nutrition, your protection, and possibly your cures.”

Across cultures, boundaries between food, medicine and spirituality were often blurred, as most remedies were passed on by women and came from inside the kitchen.
Users can search the free archive by condition or healing modality (such as ingested, applied, worn, or even spoken cures). Should you aim to cure yourself based on these suggestions? No. “But perhaps healers can learn from each other; and scholars can learn about how people have thought about medicine and wellness across time and space,” Shorter says. “The whole goal is to democratize what we think of as healing and knowledge about healing, and take it across cultures in a way that's respectful.”

IMPORTANT NOTICE: "This email is confidential containing HT Media confidential information, may be legally privileged, and is for the intended recipient only. Access, disclosure, copying, distribution, or reliance on any of it by anyone else is prohibited and may be a criminal offense.Please notify the sender immediately by email if you have received this email by mistake and delete this email from your system." Experience news. Like never before. Only on www.hindustantimes.com

The Smithsonian Magazine published an article by Isis Davis-Marks where she introduced the Archive of Healing™ to the world, one week after the AH went live.

Atlas Obscura's culinary division, Gastro Obscura, published an essay by Reina Gattuso where she interviewed the Archive's director, advisory board members, healers, and some of Dr. Shorter's students.